As summer draws to a close, another cricket season also finishes. 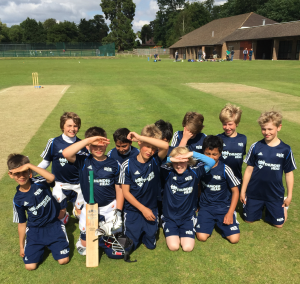 The Academy has had a very busy and successful summer.

We have had 22 Academy students selected for Surrey Performance Groups, and 15 players selected for the County Age Groups. We also have 3 senior players working within the Emerging Players’ Programme run by Surrey CCC.

We have hosted U16 and U13 teams from MaxTalent Academy in Dubai. Their tours each lasted just over a week and saw them playing against Star Cricket Academy teams, as well as teams from a number of nearby cricket clubs and schools.

Most recently we have established links with Sourav Ganguly’s Videocon School of Cricket in Kolkatta, India. We are planning a tour for our older elite boys (U15+) to this Academy this coming February.

Now that we are moving back indoors for our winter sessions, we can make use of the new floor that has been laid in the sports hall.

Coaching for this term commences this week, and sessions will be available during the October half term break. Sessions can be shared between up to 4 players.

If you would like to book individual or small group coaching, please get in touch: admin@starcricketacademy.co.uk

Dads in Pads – change of time

Our Dads in Pads drop-in sessions are continuing every week at the new time of Wednesday 8-9pm. Cost is £10/session and will be on a pay as you play basis. One of the coaches will be on hand to maintain order!

The Star Cricket Academy continues to be made proud by the success of our former students!

Ollie Pope joined the academy at 8 years of age.

He has played for Surrey’s 2nd XI, Surrey’s 1st XI and most recently England U19.

Ollie recently top-scored for England with 87 against Sri Lanka during their tour of England this Summer. Ollie has been contracted by Surrey CC.

Amar Virdi also started with The Star Cricket Academy when he was 8 years old and, playing for Sunbury CC.

He has travelled to India with the Academy to train at the World Cricket Academy. Now 18, he first represented Surrey at U12 level and earlier this year was awarded a professional contract. He justified his selection taking 5 for 77 in England’s first four-day game against Sri Lanka in Cambridge.

Ryan Patel has also had a brilliant season. He has played all matches for the Surrey 2nd XI – scoring 730 runs and taking 22 wickets. We expect he will be contracted very soon. Ryan has been a student of the academy since the age of 9.

Special thanks go to Andrew Patrick, chairman of Stoke d’Abernon CC, for his kind donation of £3,000 to Parkside School. This is being used for off-season refurbishment of the outdoor cricket square.

Thanks go to Bronte’s and Studio Azzurro for their continued support.

We would also like to thank the team at Grosvenor Billinghurst in Cobham for their sponsorship of the academy.

This website uses cookies to improve your experience while you navigate through the website. Out of these, the cookies that are categorized as necessary are stored on your browser as they are essential for the working of basic functionalities of the website. We also use third-party cookies that help us analyze and understand how you use this website. These cookies will be stored in your browser only with your consent. You also have the option to opt-out of these cookies. But opting out of some of these cookies may affect your browsing experience.
Necessary Always Enabled
Necessary cookies are absolutely essential for the website to function properly. This category only includes cookies that ensures basic functionalities and security features of the website. These cookies do not store any personal information.
Non-necessary
Any cookies that may not be particularly necessary for the website to function and is used specifically to collect user personal data via analytics, ads, other embedded contents are termed as non-necessary cookies. It is mandatory to procure user consent prior to running these cookies on your website.
SAVE & ACCEPT